2018 Changes to the Condominium Property Act and Regulation 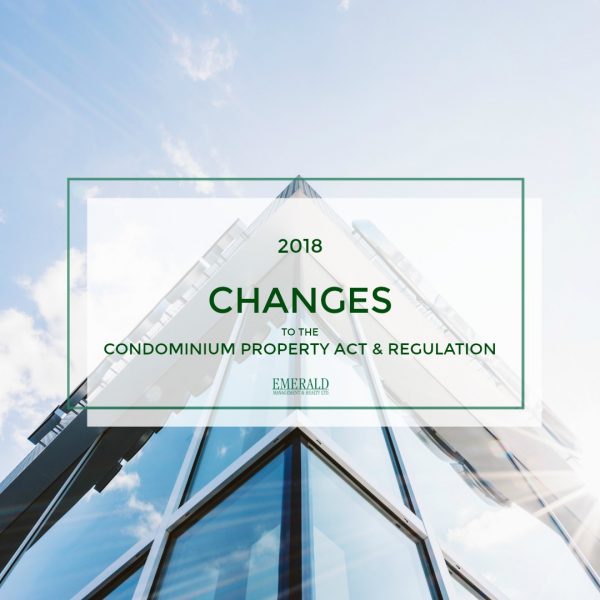 Service Alberta is working to implement clear and modern legislation to support responsible self-governance of condominiums while working to protect the owners who form part of condominium corporations in Alberta.

The initial changes to the Condominium Property Amendment Act (CPAA) were passed by the Alberta Legislature in December 2014 with regulations bringing more than 50 amendments into effect on January 1, 2018 and April 1, 2018.   Service Alberta continues to engage the input of Albertans by online survey to assist with the development of governance and dispute resolution. The various engagement opportunities were established to support the development of fair laws for condominium owners, developers, condominium managers, condominium corporations and others.

Stage 2 of the Condominium Regulation Survey regarding governance is open for feedback until July 31, 2018.

Due to the complexity and scope of the amendments coming into effect, a staged implementation is planned to upgrade and modernize the laws and regulations impacting the many Albertans that choose to live and invest in the condominium industry.

“Regulations that took effect on January 1, 2018 have:

Broadened the amount of information that developers must disclose to elected boards when the boards take over control of the corporation, such as technical documents and financial information.

Expanded the number of agreements that can be terminated by the first elected board of a condo to better protect condo owners from being stuck with a poorly negotiated agreement. The new laws allow for the inclusion of almost any agreement that may be in place during development, including landscaping agreements and maintenance agreements.

Formally recognized the ways in which an owner may call special meetings of the corporation. This empowers owners by allowing them to call for special general meetings.

Provided the government additional inspection powers and the ability to issue fines to developers, if the rules are not being followed.

Regulations that took effect on April 1, 2018 have:

Required developers to provide buyers occupancy date so they know when their units will be ready, and concrete remedies, including the ability to end a contract, when the unit is not ready on time.

Required developers to provide more information to condo buyers, including occupancy dates, materials to be used to finish the condo, and other fees that the developer will charge the purchaser.

Increased protection for purchasers’ trust money by requiring it to be held by a lawyer instead of the developer and creating specific rules about how this money is handled.

Provided means for condo corporations to recover costs directly from the developer when the developer has deliberately underestimated expenses for things like maintenance and management, during the marketing process.

Established rules for notice and options for buyers when changes happen during construction that a buyer did not agree to.

The second stage of regulations (governance and dispute resolution) are currently under review and the deadline to provide your input in this stage of consultation is July 31, 2018. Take this survey today to help the government get the Regulations right please provide your feedback at: https://extranet.gov.ab.ca/opinio6/s?s=40491

Other highlights of the changes to be implemented include:

The third stage will establish a condominium dispute tribunal, its jurisdiction and its structure. The tribunal is intended to be an affordable and efficient forum to resolve condo disputes between condominium boards, owners, occupants, and other interested parties. It is anticipated that it will be more affordable and efficient way of resolving disputes in comparison to the traditional court system.

Recognizing that the CPAA amendments are slowly being implemented (with some areas still under review), Emerald Management & Realty Ltd. continues to monitor and improve to existing protocols and procedures as required to ensure compliancy with governing legislation.  Emerald is proud of its commitment to the property management industry as a licensed brokerage with RECA with a focus education and licensing for over 40 years in Calgary, AB and area.