Visit the Giant Pandas at the Calgary Zoo 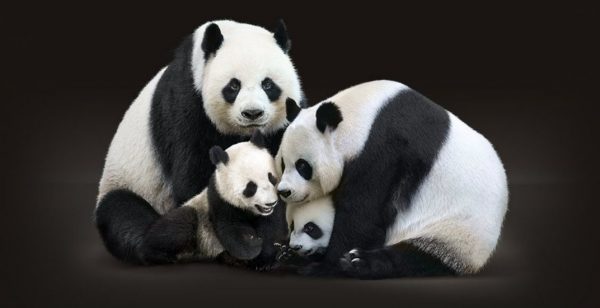 Giant pandas and their cubs

During their time in Calgary, the giant pandas will stay at Panda Passage, an exclusive, newly constructed habitat that has taken over the old elephant enclosure. The new habitat includes water features, hot and cool rocks, elevation, lush greenery and indoor, humid, quiet spaces.

The two adult giant pandas are on loan from China for a ten year period as part of a breeding program. They have now finished their first five years at the Toronto Zoo where they had their first two cubs. They will spend the next five years here in Calgary, while in a year the panda cubs will head back to China to begin anew.

The Pandas have been settling in for the past month and are enjoying their new home. Each panda eats about 40 kilograms of bamboo per day, this means that a couple times a week bamboo is flown in from China on a commercial flight. There are nine varieties of bamboo for the pandas to choose from, each panda usually has its own specific taste. Bamboo is 90% of their diet, so bringing in the correct food is a big part of the panda care.

Calgary’s Panda Passage at the Calgary Zoo opens to the general public on May 7, 2018.

Spring has sprung! 4 tips to help with the seasonal transition

Change of season from winter to spring

Spring is afoot and  its exciting to watch the snow disappear and ready to get outdoors to enjoy warmer temperatures and greener views. However, with the changing of season from winter to spring, comes the need for some TLC around the exteriors of properties to help them recover from the impact of Old Man Winter.

To maximize first impressions of your property, here are a few tips on what to look at as the snow melts away:

These tips may not seem that exciting compared to plans to set out patio décor and planters, but a few moments of prevention can go a long way to maintain curb  appeal for the satisfaction and enjoyment of all residents.

Congratulations to March 2018’s Resident Manager of the Month!

Jeanette does an outstanding job with all of the monthly tasks expected. She goes above and beyond her duties to ensure cleanliness, safety, and organization for the condominium property located in the community of Mount Royal in Calgary, Alberta.

Jeanette embodies all the traits set forth by Emerald and the Condominium Board: integrity, reliability, and promptness. Jeanette’s work has been noticed by owners and tenants alike. She consistently keeps detailed logs for maintenance and upkeep on the property. Jeanette keeps the property neat and tidy, as well as during the winter you can often find her outside chipping ice from the sidewalks and driveways.

Jeanette keeps the property in picture perfect condition, which makes residents proud to invite family and friends over to visit and does this by keeping the outdoor spaces and common areas tidy and in good repair. She exceeds the expectations of current owners and tenants and helps positively influence the decisions of potential new owners.

From all of us at Emerald Management & Realty Ltd., – Congratulations Jeanette!

Top Choice Awards helps noteworthy businesses by providing feedback on their services in a variety of categories.  By collecting and reviewing the opinions of thousands of customers annually, they provide the results to one winner in each category. As there are a number of nominees in the various categories, our team is excited and honored to receive this prestigious award once again.

Receiving this award and maintaining our position involves a great deal of dedication and hard work from our entire team.  We appreciate everyone’s efforts and focus on teamwork.  It is extremely humbling to see our efforts for ongoing improvement recognized by our valued customers and clients.

From all of us at Emerald — THANK YOU!!! for your support and vote of confidence.